The Complete Guide To Smoke and Carbon Monoxide Detectors 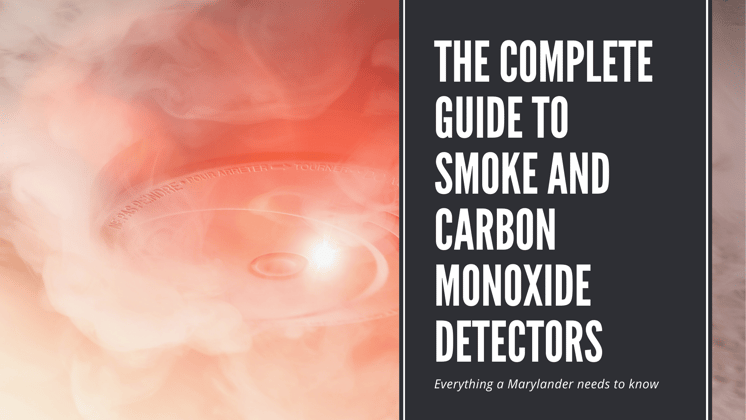 If I were to tell you that smoke and carbon monoxide detectors are mandatory in every residence and that there are laws that govern that in Maryland you likely wouldn't be at all surprised. But if I were to ask you what exactly those laws are to ensure you are keeping in line with them, you likely wouldn't know that unless your job is to know. Or if I were to ask you how do these detectors work, not many could answer that question. What if I asked you what the options are in the market, only about 50% of people would be able to answer that. So that is what we are going to go over, what are these things, what are the laws in Maryland that govern them, what options do you have, how do they work, and what are the dangers if you unplug that detector that goes off every time your dinner creates a bit too much smoke. 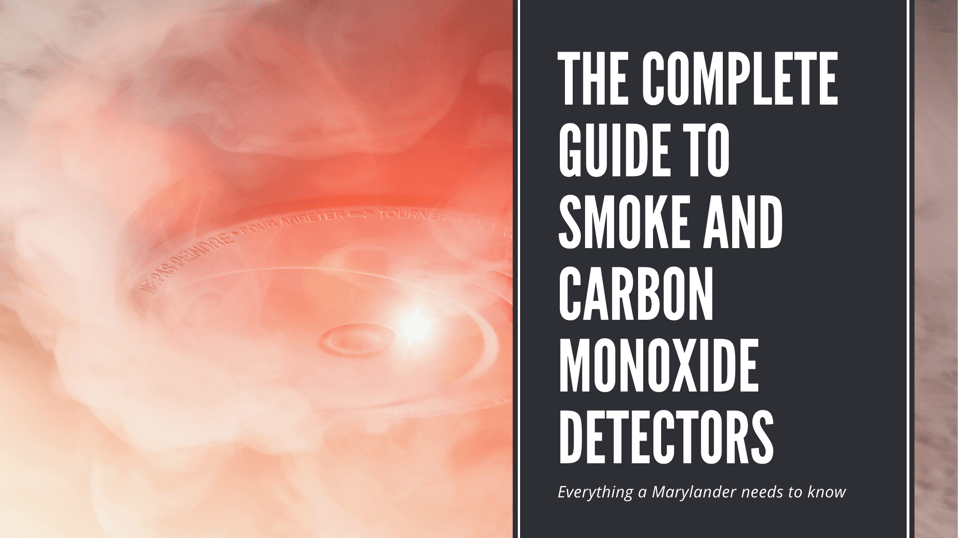 We can get started with the easy part, what are smoke and carbon monoxide detectors?

A carbon monoxide detector as defined by Wikipedia is a device that detects the presence of the carbon monoxide (CO) gas to prevent carbon monoxide poisoning. CO is a colorless, tasteless and odorless gas produced by incomplete combustion of carbon-containing materials. It is often referred to as the "silent killer" because it is virtually undetectable by humans. CO detectors are designed to measure CO levels over time and sound an alarm before dangerous levels of CO accumulate in an environment, giving people adequate warning to safely ventilate the area or evacuate. Some system-connected detectors also alert a monitoring service that can dispatch emergency services.

How do they work is the next logical question...

Well for to start with smoke alarms, you may be surprised that there are 2 main types of smoke detectors; ionization & photoelectric.

Ionization-type smoke alarms have a small amount of radioactive material between two electrically charged plates, which ionizes the air and causes current to flow between the plates. When smoke enters the chamber, it disrupts the flow of ions, thus reducing the flow of current and activating the alarm.

Photoelectric-type alarms aim a light source into a sensing chamber at an angle away from the sensor. Smoke enters the chamber, reflecting light onto the light sensor; triggering the alarm. 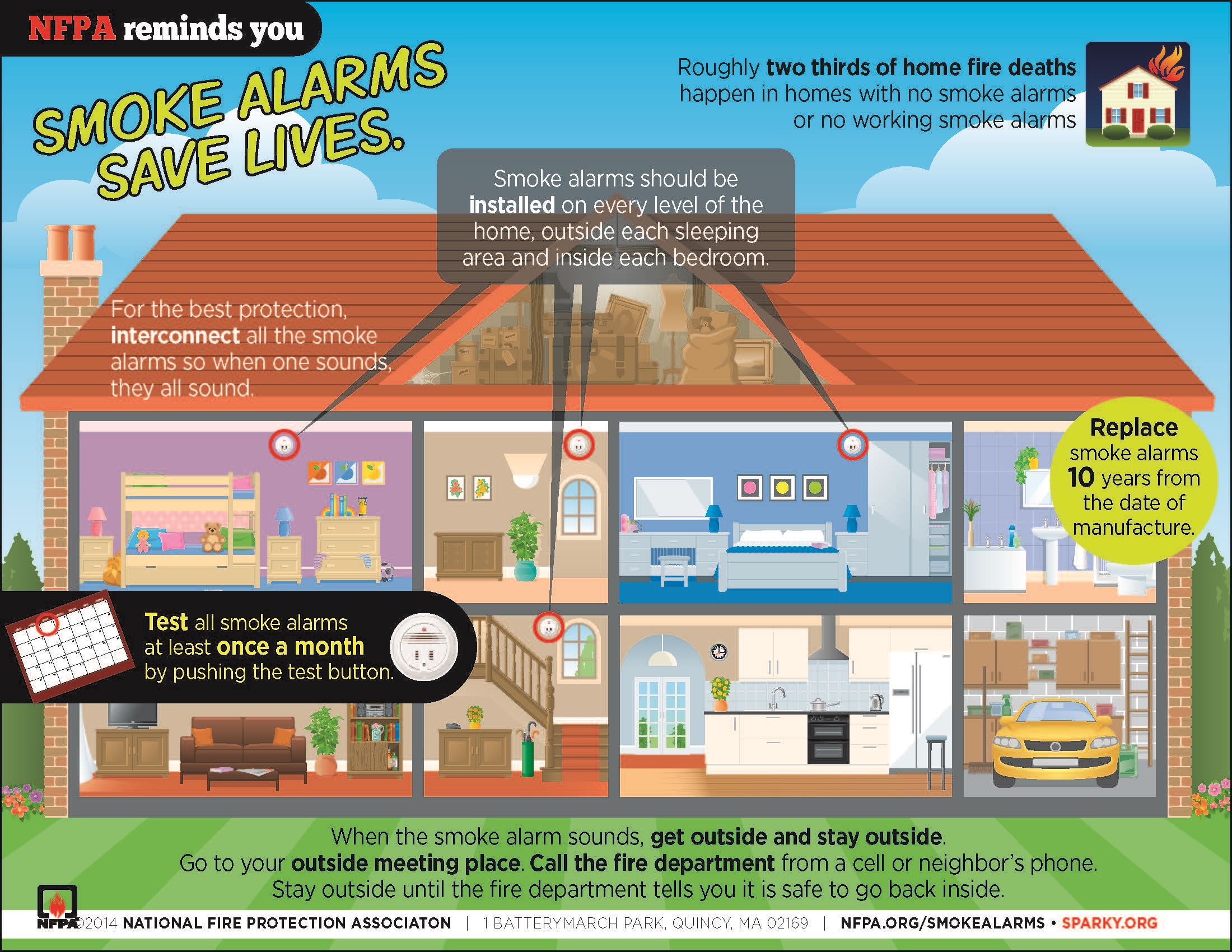 Now to backtrack, lets talk about the options for your home...

As we said there are 2 types of smoke detectors ionization & photoelectric. So the first part of the question here is which is best for you? For starters it is recommended that you have BOTH types within your home. But even within them there are options and that is if you hardwired smoke detectors or battery operated. And even within the battery operated there are the options of a 10-year sealed option or a 9V battery option. Which is better is really a question for you depending on the money you want to spend, how annoying you find it to be to change out your smoke detector battery, and how you would want a detector to go off in the case of a fire.

Hardwired smoke detectors are wired into your electrical panel and when one detects smoke and goes off, they are programmed to all go off. This is a large benefit because if there is a fire in the middle of the night in your basement, and you are asleep in your 3rd floor bedroom, you likely won't hear the alarm until the fire gets big enough to cause enough smoke to travel up to the 3rd floor and engulf the house with battery operated alarms. But if you have hardwired alarms that smaller fire will alert the alarm close to it and that will trigger the one close to or in your bedroom to go off and thus alerting you. But these come with a price tag because you really need to have them professionally installed with a licensed master electrician. Now even though these are hardwired it is still recommended that you test them yearly by touching the test button on the alarm and it is recommended that you replace them every 7-10 years because dust can build up and cause the sensors to malfunction but they aren't very expensive and are very easy to replace yourself. It is also important to note that these also have a battery in them incase you lose power so there is the battery there as a backup.

Battery Operated smoke detectors really come in 2 main options; 9V battery and 10-year sealed battery options. The 9V battery option is by far the cheapest option upfront but, you have to change out the 9V battery about every 6 months and then every 10 years you need to replace the actual smoke detector. So these are be cumbersome to own because you will have a lot of smoke detectors that need to come down and put back up every 6 months. Then there are the 10 year sealed options, these cost a close to but a bit cheaper than a hardwired smoke detector so your investment every 10 years is a bit less but again they only go off individually so if smoke it detected in one area of the home, the detector in your bedroom won't go off until the smoke grows and reaches that detector which means you are finding out after the fire has grown larger and more dangerous.

To sum it up for smoke detector options...

Carbon Monoxide detectors like smoke detectors come in the options or hardwired and battery operated but they also have the option of plug in. The differences for these are really the same as the above with the exception that their are plug in carbon monoxide detectors which are the easiest to install and you don't have to worry about constantly changing a battery out but they do take up an outlet and still have to be replaced every 7-10 years.

The last option is the combination smoke and carbon monoxide detector which come in hardwired and battery options with again the same advantages and disadvantages of the above but they have the added bonus that there can be less detectors through the home because their is only 1 unit doing 2 things vs 2 separate units.

As we said before, we are sure you know that Maryland has laws that govern where and ultimately how many detectors you need to have in your home and the law is a bit confusing so I am going to try to go over it at a high level but if you want to knows the details it is best to call an electrician and have them come out and tell you what types of alarms your home requires, where they need to be placed and how many you need.

Smoke detector Maryland law, the law requires replacement of any battery-only operated smoke alarm that is more than 10 years old
with a unit powered by a 10-year sealed-in battery. For homes constructed before January 1, 1989, an hardwired smoke alarm is required in each sleeping area. Once more, if all of the bedrooms were located on the second floor, only one smoke alarm outside of the sleeping rooms is required. Any new home in Maryland constructed after January 1, 1989 required at least one hardwired electric smoke alarm on every level of the home, including the basement and required the units to be interconnected in order that activation of any one of the required smoke alarms resulted in the sounding all of the required smoke alarms.

Carbon Monoxide detectors while recommended for all homes are not required for all home. The Maryland law states they are required in a dwelling unit that relies on a fossil fuel (e.g., wood, kerosene, gasoline, charcoal, propane, natural gas, and oil) for heat, ventilation, hot water, or clothes dryer operation and is a newly-constructed dwelling with a building permit issued on or after January 1, 2008. These detectors must be installed in a central location outside of each sleeping area or, if there is a centralized alarm system capable of emitting a distinct and audible sound to warn all occupants, the carbon monoxide alarm may be installed within 25 feet of any carbon monoxide-producing fixture and equipment.

Under Maryland law these detectors can be combination smoke and carbon monoxide detectors but you can not paint over them because it can cause them to malfunction.

What happens though if you unplug these alarms or just opt to not be up to code with the state law.

Well each county has the right to handle the situation a bit differently, but since our customers are held to county laws primarily in Anne Arundel County, Prince George's County, Howard County, and Queen Anne's County we will just review what their laws say.

Anne Arundel County considers this code violation and the law for code violations reads "A person who violates any provision of the laws of the County is guilty of a misdemeanor. Upon conviction, the person is subject to a fine not exceeding $1,000 or imprisonment not exceeding six months or both, unless a different criminal penalty is provided for elsewhere in this Code for a particular violation. Each day that a violation continues constitutes a separate offense." If you see a violation and feel it needs to be reported you can do so here.

Howard County considers this a code violations and the law reads the homeowner "is guilty of a misdemeanor and, upon conviction, is subject to a fine not exceeding $1,000.00 or imprisonment not exceeding 30 days or both."

Queen Anne's County considers this a civil violations and the law reads the homeowner is" guilty of a civil violation and subject to an original pre-set fine, not to exceed $1,000. the pre-set fines shall be $100 for a first offense, $250 for a second offense, $500 for a third offense and $1,000 for a fourth or subsequent offense."

Your safety is a top priority, so let Chesapeake Electric help you rest easier in your own home! In a typical fire, you have only moments to escape, while the odorless, colorless carbon monoxide kills silently. Don’t let a lack of an alarm system lead to a terrible tragedy. To get your hardwired system installed today or to get it inspected and get replacement detectors give us a call today!

We hope you helped you understand all you need to know about smoke detectors and carbon monoxide detectors here in Maryland but if you have any additional questions submit them in the comments below.

Lauren is a wife, mother of 3 (2 adorable furbabies and a handsome toddler), and a marketing enthusiast. She is a bit of a DIYer but knows to hire the right people when it comes to plumbing or electrical work. She enjoys binge watching bad TV, camping, wine tasting, and shopping on Amazon more than her husband prefers. Lauren joined the Chesapeake Electric team in March 2021 after spending 10 years with a marketing agency. 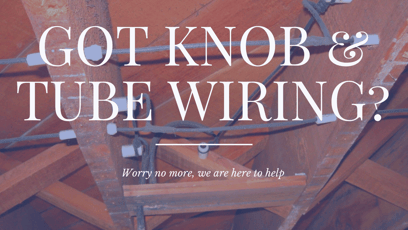 Does Your Home Have Knob & Tube Wiring? No Worries, we can fix it

We are in a great market to sell a house at the moment due to low inventory, so many are...

Are You Using Recessed Lighting To Your Benefit?

Recessed lighting is lighting that is installed directly inside a ceiling, wall, or other surface....